You are here: Home / Email Marketing / Email is Not Dead

In the age of Facebook, Twitter, Tumblr and YouTube one would think that email is so old school and needs to go the way of the dinosaur!  I mean who doesn’t chuckle when they see an @aol.com email address?  But email is far from dead.  As a matter of fact, according to ExactTarget’s 2012 Channel Preference Survey, email is “the number one direct channel in terms of daily use and consumer reference for both personal and marketing communications”.

Even I was blown away at their findings.  Take a look at graphic 1.3 and see if it doesn’t make your jaw drop too.  Email is 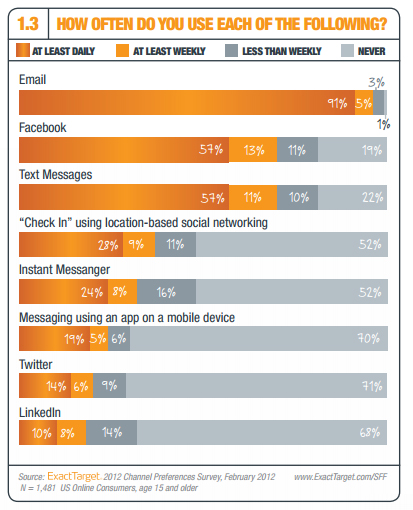 still smoking the competition when it comes to who is capturing the attention of eyeballs.  It puzzled me for a sec since I thought text would’ve dethroned email.  There’s a couple reasons why I think that is not the case here.

In the rest of the survey’s stats, it breaks down email use by age.  Email is the preferred method of communication by most of the older population – starting with the group that is more entrenched in the workforce.  And it probably will remain that case even as younger generations enter the workforce.

Another reason for email’s dominance is that it has the first leg up on many of the other methods mentioned – except for direct mail, which has been around since the cave man.  People are used to email and how it works and it is usually requested (permission-based).

I also suspect that if text, apps, posting on Facebook, messaging and “checkin in” on location-based social networks were lumped into one category called mobile, it would definitely surpass email in usage.

A few things to keep in mind when talking email:

The end of the story is that email is still a player when it comes to marketing and businesses should take notice.

[alert-orange] Need help with your email marketing or simply need to get started?  Call 419-318-9881 for a free consultation. [/alert-orange]