You are here: Home / Social Media / Slow & Steady Can Still Win the Race 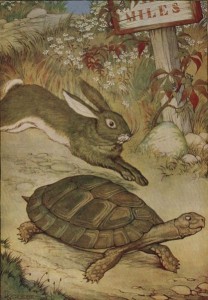 In these days when being a social media guru is all the rage and everyone and their mother is getting into consulting, it is good to be wary of the inevitable scams out there ready to prey on the clueless, but eager business owner or company. Lately, there has been a few lists floating around online on what to look for when hiring a social media professional to get a company into the online social scene properly.  A couple of common things to look out for, according to these authors, is the self-proclaimed “expert” or “guru”, the consultant with no answer to the ROI question, or the person who doesn’t even use social media to market their services. However, there is one I see mentioned that I have a hard time agreeing with, as did some of the people that commented on their blog posts.  That is the question of time – or being an early adopter to various social media platforms like Twitter.

According to some, if the “so-called” social media professional wasn’t one of the first people using Twitter or some other social network (or forum) then they were merely followers who are riding on the coattails of the real pioneers and visionaries, the people who knew, just knew, all along that social media was going to be big business some day.  They usually then add a smug line about how they invented the internet or was online when computers still communicated with tin cans and a string.  While I can sort of understand why they would give this warning, it is still an unfair assessment to make.

There are many reasons why someone may not have been an early adopter to social media.  Here are three just to name a few.

Sphere of influence
If you’re surrounded by people who don’t know, participate in or value social media that helps in delaying your start in the game.  Personally, my sphere and social media education only increased AFTER I joined a social network.  There was never any offline encouragement, discussion or awareness previous to that.

Ignorance
There are people still out there who think social media is just a way for bored people to follow the tales of their neighbor’s cat or be stalked by a sexual predator.  They don’t really know anything about it because they’ve never been on it (and face it, that’s the only way to actually “get it”) and they get their information about it from other people who are clueless.  When the knowledge comes by way of engagement or education, the light bulb will come on.

Physical limitations
While this is not so much an issue for current generations, computers and high speed internet were things that were hard to come by.  Not everyone had one or the ability to spend countless hours blogging or chatting with people around the world.  When those opportunities arose they were like lost treasures that were discovered.

The simple fact is that everyone has got to start somewhere.  No one tells the author to not write a book about, say, Twitter, because someone else already wrote a book about it when it first launched.  And it is certainly unfair to recommend that people should not buy the book because it wasn’t one of the first Twitter books.  While I understand that no one wants to be the “unlucky first” client to the new consultant, all you have to remember is when you were new and praying for someone to give you a chance to understand that being the 1st one out the gate was not the sole indicator to success.